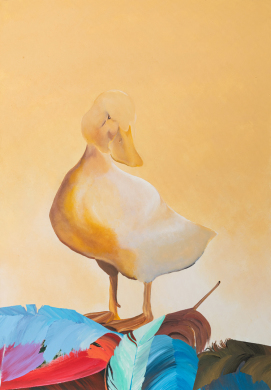 Massimiliano Milano illustrates stories that live within him giving them shape and colour. He was born in 1973 in a wonderful island and lives in the Emilia province surrounded by green countryside and the sound of animals.

These are a great source of inspiration for him, with their funny expressions, curious eyes, their moves, so much so that very often the real protagonists of his paintings are cows, whales, elephants, and giraffes.

The human figure, however, emerges strongly in his recent works and reveals a nascent interest in the definition of anatomical forms, although these often have decorative and stylized features.

He graduated from the Art School of Bologna and later on he got a degree in Art History at the University of Arts in Parma.

He does not aspire to call himself a painter, but in any case he tries to give an artistic taste to what he illustrates. Looking at his works is a bit like finding out about him, it is an invitation to get to know him better and remove layer by layer a skin within which it is increasingly difficult for him to contain himself.